Whenever I plan a new route in an area I have never been to before, I never know what is going to turn up.  In most cases I have nothing more than a damned good walk but occasionally something special happens.  This is the case with this particular walk.

Where I live, at the western end of the Southdowns National Park, there are numerous Military Training Areas,  Most of these were set up during World War 2 for the purpose of training troops prior to D Day.  Many are still in use by the Army, but there are a lot which are now open to the public under Managed Access Agreements.  One such place is the Hankley Common Training Area north of Hindhead, Surrey.

I had planned a simple short walk around the southern part of the Training Area.  From the outset I was surrounded by the usual collection of walkers, dog walkers, off-road cyclists and runners.  Despite the numbers of cars and people I saw at the car park, you walk in total isolation due to the expanse of the area and, as a result, I was enjoying a very pleasant walk.

However, half way round I came across something totally unexpected.  At first I thought there was a rock escarpment in the trees, but realised that did not tie in with the local geology.  Closer examination revealed a huge walled structure made from reinforced concrete.  I had come across a World War 2 training relic – the remains of the Canadian’s Atlantic Wall.

The Atlantic Wall was an extensive system of coastal defences and fortifications built by Nazi Germany between 1942 and 1944  It ran from Scandinavia all the way down to Spain as a defence against an anticipated Allied invasion of Europe from the United Kingdom.

The fortifications included huge coastal guns, batteries, mortars, and artillery positions.  It was manned by thousands of German troops.  When the Allies eventually invaded in 1944, most of the defences were stormed within hours. Today, ruins of the wall exist in all of the nations where it was built, although many structures have fallen into the ocean or have been demolished over the years.

D-Day training sites were created in Britain in order to practice for Operation Overlord, the invasion of Northern France by allied forces in 1944. In 1943, in an area of Hankley Common known as the Lion’s Mouth, Canadian troops constructed a replica of a section of the Atlantic Wall. It is constructed from reinforced concrete and was used as a major training aid to develop and practise techniques to breach the defences of the French coast prior to the D-Day landings.

The wall is about 100 m (330 ft) long, 3 m (9.8 ft) high by 3.5 m (11 ft) wide. It is divided into two sections between which there were originally steel gates. Nearby are other obstacles such as dragon’s teeth, reinforced concrete blocks and lengths of railway track set in concrete and with wire entanglements. Many of the relics show signs of live weapons training and the main wall has two breaches caused by demolition devices.  (Wiki). 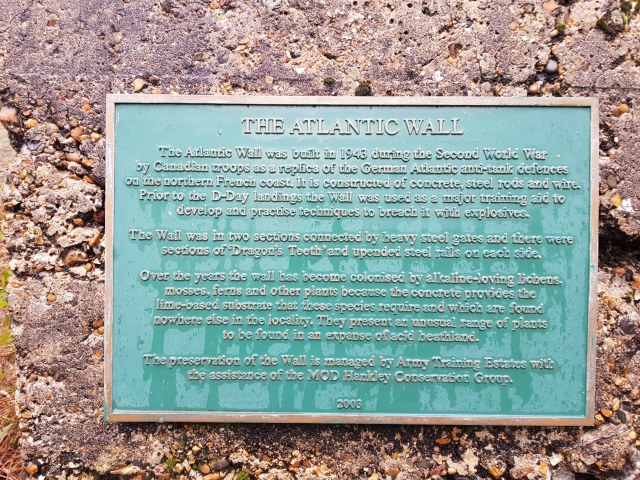 Remember, history is anything that is not of today.  It does not have to be hundreds or thousands of years old to be history or Archaeology.  It is just as interesting to come across a World War 2 relic as an Iron Age Hillfort.  In fact the history of World War 2 is close enough that we may have living relatives who can relate directly to the war in someway or another.

Whenever you go for a walk, keep your eyes open for the unusual.  If you are not sure what it is then take photographs, make a note of what you have seen and where, then google it later.  There is so much out there just waiting to be found – so go out and start exploring.