Following on from the success of the 2017 Alternate Three Peaks Challenge where I climbed the equivalent height of the three highest mountains in the world, I decided I needed a change of walking style.  So for 2018 the plan is to exchange height for distance and see how far I can walk in the year.

So the grand plan is:

To walk the equivalent distance of the Nile from the confluence of the White Nile and the Blue Nile, at Al Mogran near Khartoum, to the Mediterranean Sea in 12 months.  Starting 1 January 2018 and ending on the 31 December 2018, covering a distance of 1630 miles (2623 km) or 136 miles per month. 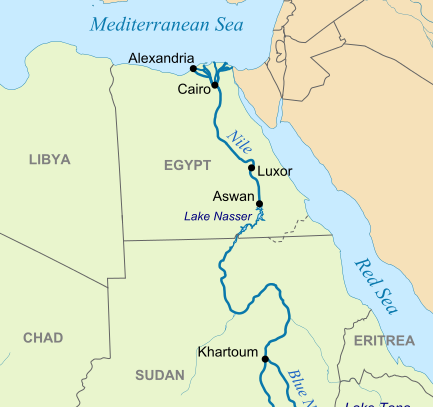 This imaginary journey will take me through Sudan and Egypt and around the shores of Lack Nasser, one of the largest manmade lakes in the world.  It will go through one of the greatest archaeological landscapes known to man – a subject academically close to my heart.  Eventually arriving at the enigmatic Nile Delta before entering the Mediterranean Sea at Alexandria.

Helping me along the way will be other challenges to keep me occupied.  These have yet to be decided though one will be the Yorkshire 3 Peaks carried over from 2017 due to injury.  Two of the other possibilities are the Race to the Stones & Race to the King ultra marathon walks.  A decision on these and others will be made early in 2018.

So, what will this challenge achieve – well nothing except to prove that age or ailment is no barrier to getting outside and up those hills.  If I can do at 61 with severe back pain and arthritis then YOU can do it.

As always, I will be doing these challenges in order to raise money for my charity which this year remains Parkinson’s UK full details to follow.