Due to a couple of extra hours in bed on Sunday morning I made a quick change of plans and grabbed an old pre-planned 12km walk from my OS Maps App.  The route started in Hambledon, Southern Hampshire and wound its way through the vineyards to Broadhalfpenny Down and back to Hambledon.  The route took me past a couple of small local village cricket grounds which on this warm and sunny Sunday afternoon reverberated to the sound of leather on willow.  But it was however, the sign on the pub opposite the Broadhalfpenny Cricket Ground that got me very intrigued. 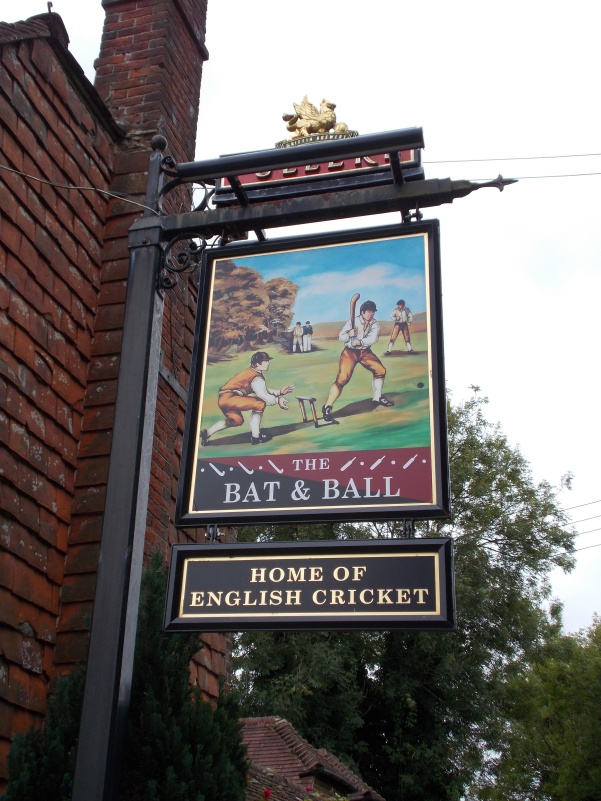 Once home I started to research the history of cricket and in particular the history of one village cricket club.  I discovered that cricket originated in the 16th century in the south-east of England and may have come over from France in a different form.  Originally played with a hockey type stick, two stumps for the wicket and the ball was bowled underarm (as seen on the pub sign).

It came as a complete surprise to learn that one of the most famous of the early clubs was Hambledon. Starting out as a village club founded in 1750 it was well patronised to the extent that it was the focal point of the game for about thirty years until the formation of MCC and the opening of Lord’s Cricket Ground (the modern home of cricket) in 1787.

Hambledon Cricket Club soon became the most powerful club in the country. It took on the responsibility for developing the laws of modern-day cricket – including such introductions as length bowling and the addition of a third stump, and the regulation of bat width! – the club earned its reputation as “the cradle of cricket”, a title by which it is still known.

It was throughout the latter half of the 18th century, that the club played an England XI on fifty-one occasions and managed to defeat them twenty-nine times. Only Australia can similarly claim to have had the better of England over the years!